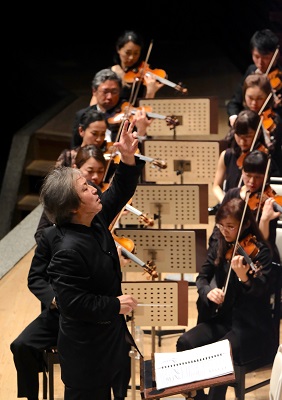 The unprecedented situation that has been causing havoc since last year has forced dramatic changes in the way we as humans experience music and other arts. Virtual events have become the expected mode of communication for performers, with increasingly creative and rich variations in their delivery. Yet at the same time, the deluge of online communication has also made us freshly and lucidly aware of how unequalled live music—performed in situ to bring performer and audience together under one roof—really is.

In June 2020, the Tokyo Metropolitan Symphony Orchestra (TMSO) wasted no time conducting scientific studies toward resuming live-audience performances, which we did in July after setting out our original guidelines and roadmap. The whole experience proved so enlightening it felt as if we were transported to a completely new realm. Embracing this cherished experience, the TMSO and I are extremely pleased to present the lineup for our 2021 season, which sets out to entice audiences to explore new horizons.

The 2021 season openers are from the oeuvre of Gustav Mahler: his breakthrough work as a composer, and his late masterwork. When he was writing his very first major orchestral piece, Mahler truly dawdled over the decision as to whether to make it a symphonic poem or a symphony. The piece has all the chaos one would expect from a first symphony, interspersed throughout as it is with sounds from nature and secular dance music as well as extracts from his own Lieder eines fahrenden Gesellen and featuring a Funeral March that incorporates both a French folk song and klezmer music (instrumental music traditionally played by Jewish communities on social occasions), complete with cymbals and bass drum. But what gradually emerges out of this melting pot are tears of passionate love, a homecoming to await death, and celestial sounds, all culminating in a spectacular musical body that can be likened to a nutshell version of the trajectory of Mahler’s own music, in the sense that both materialize after long periods of maturation. From his Symphony No. 1 (1888) to Das Lied von der Erde (1909), Mahler’s 20-year-long journey was that of a composer “simultaneously maturing and decaying”—something we might ponder as we follow the young hopeful “wayfarer,” whose sentimental wanderings ultimately take him to the final section of the Sixth Movement of Das Lied von der Erde, where he sings, “I will never wander far. Calm is my heart, awaiting its hour.”

Expected in October is a concert performance of an excellent opera written by Alexander Zemlinsky based on an Oscar Wilde tale. The concert is part of a project celebrating the 150th anniversary of the birth of the composer, who was significantly influenced by Mahler. February will see performances of major works by Dmitri Shostakovich and Benjamin Britten rescheduled from 2020, hopefully to a better time and place, plus the Japanese premiere of new work by Mark-Anthony Turnage, presenting an impressive lineup of orchestral masters.

A 2021 season highlight conducted by TMSO Principal Guest Conductor Alan Gilbert is the program centering on the respective Symphony No. 7s by 20th-century Swedish masters of symphonies Allan Pettersson (July) and Anton Bruckner (March). The Pettersson No. 7—the piece that made the composer’s name—in particular is a work close to Gilbert’s heart and one that he has conducted on a number of occasions. The lush melody and crystalline harmony of the piece guarantee a deep emotional impact on the listener. Equally enthralling will be the performances conducted by TMSO Honorary Conductor for Life Kazuhiro Koizumi of compositions by Arnold Schönberg and Johannes Brahms (May), and Arthur Honegger and Gabriel Fauré (June). This fascinating selection explores the juxtapositions of tradition and innovation in the former, and between the tragic and blissful in the latter. Meanwhile, TMSO Conductor Laureate Eliahu Inbal is in all readiness to have us in awe with TMSO’s eagerly awaited performance of Shostakovich’s Symphony No. 13, “Babi Yar” along with a lineup of Hungarian masterpieces.

One of the elements of the 2021 season is TMSO’s first ever performance under the baton of guest conductor Daniel Harding, who I am sure will take us all to new heights with his interpretation of An Alpine Symphony. Also guest-conducting the TMSO for the first time are: internationally spotlighted John Storgårds and renowned master Osmo Vänskä, who will bring Finnish masterworks to the season; Viennese master conductor Sascha Goetzel, who will present The Firebird; and Singaporean rising star Kahchun Wong, who will present Sergei Rachmaninoff’s Symphony No. 2. Master musicians scheduled to perform with the TMSO this season include Tabea Zimmermann, Paul Lewis, and Nemanja Radulović. In addition, it is both remarkable and delightful that a great array of young Japanese musicians in their twenties are also slated to join our performances: Ayana Tsuji, who will be performing with Michiyoshi Inoue and is one of the world’s leading young violinists; Mayu Ozeki, who will bring a performance of Max Bruch pieces to our Promenade Concerts; Coco Tomita, who will perform work by Alexander Glazunov; and, presenting his rendition of an Antonín Dvořák concerto, Haruma Sato, the first Japanese cellist to win 1st prize at the ARD International Music Competition. None of these performances are to be missed. Please also look forward to solo performances by TMSO musicians Yoshihiro Ando, who will be taking on Kalevi Aho’s technically challenging Timpani Concerto, and Yusuke Yanagihara, who will be performing Carl Nielsen’s Concerto for Flute and Orchestra.

I hope with all my heart that the TMSO will be able to present this season’s concert calendar in the most complete way possible. This may well take longer than we envision, but TMSO members and I will be eagerly looking forward to meeting our audiences, and putting everything we can into each and every performance.