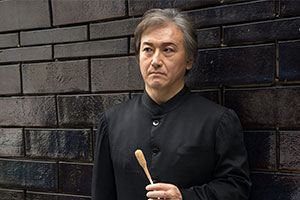 Tokyo Metropolitan Symphony Orchestra extends the term of office of Music Director Kazushi Ono for three years up to March 2026.

Since his assumption of the office of the Music Director in April 2015, Maestro Ono has enthralled audiences with his repertoire that ranges from classical to modern, and from eastern to western pieces, while also utilizing his excellent leadership skills on a number of projects such as European Tours and SaLad Music Festivals.
After the onset of the COVID-19 pandemic in Spring last year, he lead the way in the Japanese music industry by comprehensively examining measures to combine infection countermeasures and control with musical output, the results of which were published internationally.
Maestro Ono and Tokyo Metropolitan Symphony Orchestra will newly make history together with a view toward the 60th anniversary of the orchestra.

To all who support TMSO,

I am delighted that the contract between Tokyo Metropolitan Symphony Orchestra and myself has been extended until FY2025, the year of the 60th anniversary of TMSO. After taking the lead in publishing a roadmap toward the recommencement of our public performances during the COVID-19 pandemic, TMSO and I devoted ourselves to the performance of Beethoven’s Eroica Symphony, Mahler’s Symphony No.4, and Poulenc’s Gloria, among others. In the years ahead, I hope we can build upon those experiences and make a contribution to the development of music culture in the new era.
As announced recently, I was also appointed as the Music Director of the Brussels Philharmonic starting in the 2022-2023 season. As the orchestra actively performs contemporary pieces, my dreams include a joint contract between composers and the two orchestras, the first overseas TMSO performance, and using music to deliver a message from Japan to the rest of the world. I hope that you will give your attention to TMSO and absorb yourself in the heartfelt enjoyment of our rich sound.