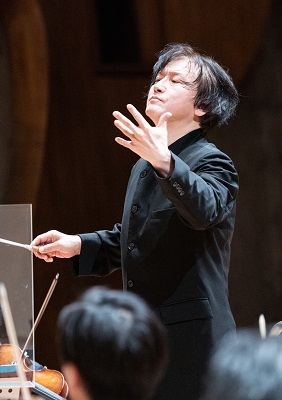 Dear Tokyo Metropolitan Symphony Orchestra subscribers, dedicated music fans, and young people discovering TMSO’s music at our concerts for schools: It is my utmost pleasure to announce TMSO’s 2023–2024 season calendar.
The challenges the orchestra has faced over the past three years are evident in the new calendar—some of the programs had to be replaced, and visiting conductors and soloists are appearing after long postponements. However, the lineup on the whole conveys the sense of us heading toward new beginnings, something I believe you will truly enjoy.

The new season’s first concert conducted by myself (April 13 Subscription B) will present Mahler’s Symphony No. 7, the first piece I conducted as TMSO’s Music Director. It is deeply significant for me to revisit this work, marked by its cosmic scale and super-dimensional scope.
The second Subscription Concert (April 21 Subscription A) presents the long-awaited Japan premiere of Time Flies by Mark-Anthony Turnage, which includes “Tokyo Time” written specially for TMSO. Between the Turnage and Elgar’s Enigma Variations will be a performance of Lutosławski’s Cello Concerto with Michiaki Ueno as soloist. Ueno performed the same work in the final round of the 2021 Geneva International Music Competition to win first prize in cello. The exchange of sparks between soloist and orchestra is not to be missed.
Our October Subscription Concert (October 14 Subscription C) will commemorate the tenth anniversary of the passing of James DePreist, who was TMSO’s Permanent Conductor from April 2005 to March 2008. We have chosen the very same Schumann Violin Concerto performed in the last TMSO concert (December 2009) conducted by the late maestro, soloed as in December 2009 by Isabelle Faust. This intense and highly romantic concerto will be part of a program that also includes Magnus Lindberg’s Absence, written in 2020 to mark the 250th anniversary of Beethoven’s birth and inspired by motifs and themes from the late great composer’s life, and Symphony No. 7, composed by Beethoven himself.
December Subscription Concerts (December 7 Subscription A; December 8 Subscription C) will spotlight works associated with the symbolist painter Arnold Böcklin in recognition of the 150th anniversary of the births of Reger and Rachmaninoff. Many of you will probably think of Rachmaninoff’s Isle of the Dead, inspired by a Böcklin painting of the same title. In the present instance however, we have selected Reger’s Four Tone Poems after Arnold Böcklin, in which the composer created music for all four ominous paintings comprising the series that includes the Isle of the Dead. We have paired the Reger with Piano Concerto No. 1 composed by Rachmaninoff in his youth, inviting master pianist Nikolai Lugansky for the performance. Furthermore, Schumann’s Symphony No. 4 will complement the early Rachmaninoff and late Reger works with its benevolence.

As ever, TMSO’s distinguished resident conductors will be ready to deliver their fascinatingly exciting lineups: Maestro Eliahu Inbal has in store for us Shostakovich’s Symphony No. 9, as well as his renowned renditions of Bernstein’s Symphony No. 3 “Kaddish” (February 16 Subscription B; February 17 TMSO Special). Most remarkably however, the 88-year-old master will be revisiting Mahler symphonies with TMSO, beginning with Symphony No. 10 edited by Deryck Cooke (February 22 Subscription C; February 23 TMSO Special). I am sure the expression “beginning with” will keep you all on the edge of your seats—please stay posted for further updates.
Alan Gilbert will be conducting Mozart pieces performed with Stefan Dohr, principal horn of Berliner Philharmoniker (July 19 Subscription A; July 20 TMSO Special). We will all be eagerly waiting to witness how he and TMSO will subsequently make the ascent to Alpine peaks in An Alpine Symphony by R. Strauss. Further treats conducted by Gilbert this season include a Rachmaninoff’s Piano Concerto No. 3 performance with world-renowned pianist Kirill Gerstein (July 15 Promenade); and Beethoven’s Symphony No. 9 (December 24, 25, 26 TMSO “Beethoven 9” Special).
Ahead of the upcoming 200th anniversary of Anton Bruckner’s birth in 2024, TMSO is planning to commence a series of performances featuring Bruckner works in 2023. Among the planned works is Symphony No. 2 (October 20 Subscription B) to be conducted by Kazuhiro Koizumi, who will no doubt bring his brilliant touch also to the TMSO performance of Prokofiev’s Symphony No. 5 (November 24 Subscription A).

Turning to our guest conductors this season, Marc Minkowski will be conducting TMSO for the first time in four years, at long last treating us to his renditions of Bruckner’s Symphony No. 5 (June 25 Subscription C; June 26 Subscription B) originally scheduled for September 2021 had it not been for the COVID-19 pandemic.
Lawrence Renes is a guest conductor becoming increasingly familiar to TMSO. To immerse us in concertos, he will be joined this time by violist Tabea Zimmermann—who could not travel to Japan on the previous occasion back in September 2021—followed by a Rachmaninoff piece (September 23 Subscription C) and a major Prokofiev work (September 18 Promenade).
Sascha Goetzel, who in April 2022 conducted superb performances of the opera Der Rosenkavalier at the New National Theatre, Tokyo, will be returning to Japan to guest-conduct TMSO for performances of Korngold’s highly evocative Sinfonietta, as well as Beethoven concerto performed with charismatic violinist Nemanja Radulović (September 8 Subscription B)—something we can all look forward to.
Antoni Wit will bring his baton to TMSO’s performances of Penderecki, and will be joined by Kyohei Sorita for renditions of Rachmaninoff (December 19 Subscription B), none of which we can afford to miss.
The program to be guest-conducted by Osmo Vänskä (October 30 Subscription A) simply fills me with excitement—I wish to thank him sincerely for agreeing to conduct Sibelius symphonies Nos. 5, 6 and 7.
John Adams visiting Japan and conducting TMSO (January 18 Subscription B; January 19 Subscription A) will most certainly make music industry headlines. I have had the pleasure of conducting his works on many occasions, and still remember as if it were yesterday how he took me step by step through each phase of the undertakings. Performing a John Adams work conducted by none other than the composer himself is a rare and privileged experience for TMSO, and I feel genuinely fortunate to be able to present this performance to our audience.

Please look forward to our 2023–2024 season, which I sincerely hope will meet and even surpass your expectations.